After coming up with a concept of an app for iPhone, it’s only natural to start wondering about the budget for iOS development services. Will your business afford it? Will the investment pay off? Can you launch a smaller feature pack and expand it afterward?

To learn the answers, you need to find out what exactly constitutes the price of the project, and that’s exactly what we’re going to discuss in this article. By pointing out major factors that affect iOS app development cost, we’ll hopefully help you get a grasp on estimates. 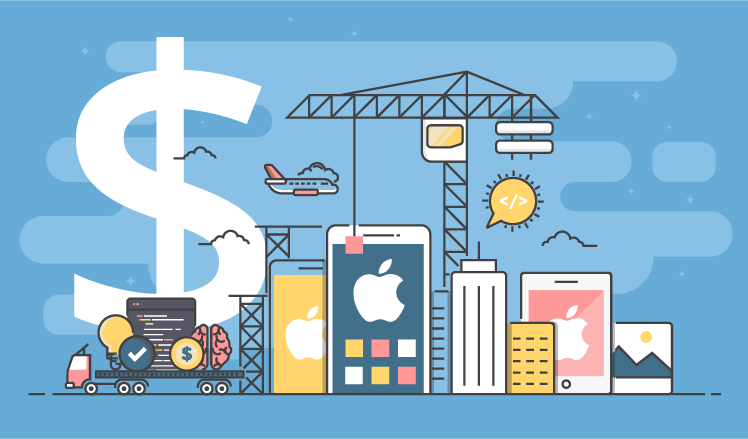 A common strategy is to go iOS first, and, if necessary, Android second. Developing an iOS app has been long considered a cheaper endeavor, and launching the first version of a mobile app on less expensive terms is quite logical.

The price difference isn’t about brands (if that were the case, iOS would be a pricier alternative), but rather about development time. Because of hundreds of third-party devices that any Android app should be adjusted to, it usually takes 2 times longer to develop an Android app. With an iPhone or an iPad, the variability of technical specs isn’t that overwhelming, so it takes less time to develop an app. And the less time developers work – the less you have to pay them. So if you have chosen native iOS over native Android, you’ve made a savvy decision.

With hybrid development tools, iOS app development cost is lower due to shorter development time. However, you have to be careful about functional compatibility. You will save more than 60% of your native development budget with Cordova, but your app will succeed only if it has the most basic features, since Cordova can only handle as much. Alternatively, you can build your iOS app on Xamarin, thus saving up around 10%-20% of the initial price, to get a near-native UI and robust functionality.

These two development options give you a chance to hit both iOS and Android with one codebase. In case you definitely plan to create an Android app sometime after your iOS debut, consider going hybrid or cross-platform from the very start.

Although it can be obvious, let’s state it clearly: the more complex the app, the more time a developer needs to create it, and the more money they will charge. However, what exactly is complex and what’s not? To elaborate, we’ll switch to figures now.

Please note that all estimates below refer to native development and are approximate.

To think of a simple app that would cost you the least regardless of the other factors, imagine a scheduler, a logger, an e-mail client, or a calculator for specific variables (for instance, daily water/calorie intake). Generally, these mobile apps allow a user to view some items and perform limited actions on them. Although such apps can be useful, the price itself indicates that this isn’t an app that will transform your business.

By raising the bar for your iOS app’s functionality, you’re raising the budget too. A login feature, for one, will cost you $500-$1,000, but only if you are going to offer a single login option. Most likely, you want to give your users a broader choice (just as they expect you to), so your expenses on a login module via e-mail and several social networks will grow to $5,000.

Social sharing, Bluetooth transmission, messaging and push-notifications are going to account for another $5,000. Since different services use different APIs, the more of them you would like to connect to your app, the more you should be ready to pay. Also, to implement geolocation, you will spend additional $2,000.

Prepare around $8,000 for the following monetization features:

Add user profiling, search and rate/review options, as well as media-playback as something to impress your users with – and you have the last $10,000 in this tier.

Having implemented a feature pack like that, you will probably want to attract users with a trendy, professionally designed icon. The prices for an iOS app icon design vary from $500 to $1,500 or even higher.

A backend can outright double the initial iOS app development cost, yet if your app has a lot of data to store or allows users to access it remotely, you definitely need it. When integrated with it, an app itself stays lightweight and lets users view various data without downloading it to their devices.

Other features that altogether can add up to over $10,000 to the already existing price are:

The third factor that can largely affect your iOS app development cost is the kind of people who will work on your project.

The hourly rate of U.S.-based iOS developers is globally the most expensive – $150/h. This rate can be higher if you are working with a development agency, and even higher in case you’re requesting development from a renowned industry leader. This cooperation, however, is the most open of all options.

As you may guess, projects carried out by off-shore developers involve additional costs. You may encounter language barriers, time-zone differences and cultural gaps. Be sure to check out your potential off-shore partner’s background before you launch a project with them.

To reiterate, the factors that can help you guesstimate an average iOS app development cost are the development type (native, hybrid or cross-platform), the complexity of your app (its features and presence/absence of backend integration), as well as your vendor location. By being mindful of these factors, you can understand, predict and control your iOS app development project price to some extent.

Mobile App Development
How Many Mobile App Vendors Do You Need?