As long as there is no clear winner in the platform wars, mobile app developers won’t settle for either Android or iOS development only. The idea of targeting a wider audience is too alluring, and cross-platform app development tools make it easier and faster for developers to deliver their apps to Android, iOS, as well as less popular platforms. 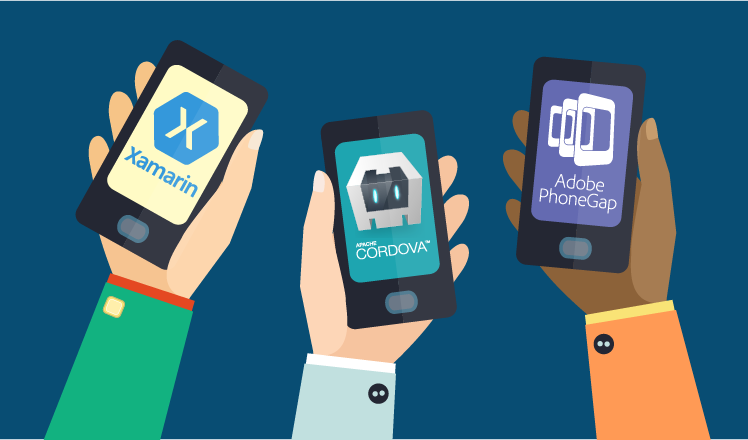 Difference between ‘hybrid’ and ‘cross-platform’

The confusion starts with the names: there’s cross-platform and there’s hybrid. Sometimes these two words are perceived as one and the same thing, other times their meanings get used interchangeably. In actuality, the difference is huge and critical for the entire domain.

While cross-platform development is somewhat an umbrella term for any mobile app project that targets multiple platforms, hybrid is a subtype that implies the use of a specific development model. Legitimate representatives of hybrid development tools are Cordova and PhoneGap. Both allow to create apps that are web/native ‘hybrids’, with the code being written in HTML, CSS or JavaScript, and later wrapped in an invisible native WebView browser.

The pros of cross-platform mobile development 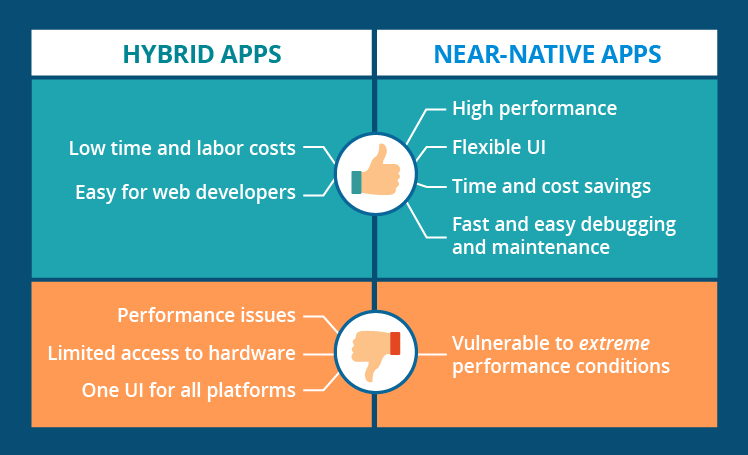 One of the major advantages of hybrid apps is their fast development. Even inexperienced developers say that they were able to develop and finish an app in a matter of several days. Certainly, the shorter the development, the lower its costs.

Web developers have another benefit of reusing their skill without any additional studies or experience in app development. With their pre-existing knowledge of frontend development, they don’t have to go out of their line while creating mobile apps from scratch.

We didn’t call these tools ‘near-native’ for nothing: all-inclusive nativity is the key here. Mobile apps developed in React Native or Xamarin are treated as native ones at the code level and, unlike hybrid apps stuck in WebView, have direct access to mobile hardware. With little to none performance limitations, these apps are agile in both video and audio processing, and are successfully used in developing complex mobile apps.

The secret to saving time and costs with this cross-platform development option is in the shared fundamental app logic. Basically, no matter how many platforms developers target, they will have to create an app’s core only once and then tune functional and visual platform specifics separately. Further changes and fixes in the logic would need to be done once, too. This way, not only the development process but also debugging and maintenance get faster and easier.

Another advantage is flexible UI/UX development. In Xamarin, for instance, there are two UI options. One is a basic and consistent interface developed with Xamarin.Forms; the other can be tailored to platforms in Xamarin.Android and Xamarin.iOS and have a 100% native look and feel.

The cons of cross-platform mobile development

Unlike native and near-native tools, the ones for hybrid development can’t guarantee impeccable performance. WebView is still technically a browser and is separated from the device’s hardware for the same safety reasons any real web browser is. To activate GPS, a camera or an accelerometer, hybrid apps need to take advantage of special plugins. And those seriously impede both agility and security.

Mediocre performance aside, hybrid development can only offer one standard interface for all platforms. Still, while being identical across all platforms, hybrid app UI can be quite neat if developed on a suitable framework. Ionic, for one, has a great choice of material-design templates and kits, which makes it easy for developers to create a stylish design without hiring UI/UX experts.

No matter how great the performance of such apps is, near-native is still not entirely native. Although it’s hard to say where exactly the functional limit of this cross-platform development option lies, it still exists, while native apps don’t have this limit as such.

The difference between hybrid and ‘near-native’ cross-platform development tools is essential for understanding their best use cases. Every tool is helpful for at least one purpose. There are projects that can largely benefit from Cordova’s skill reuse or fast development, as well as those projects that can have the best of a bargain by maintaining only one core platform version instead of three.

Clinging to native development alone and denying other possibilities isn’t practical. It’s possible to make a successful decision if you understand the future app capabilities well and can estimate impartially what each development tool offers.