Editor’s note: In the article, Vadim answers a common question of companies planning a web development project: should we use PHP, or is there a better alternative? Read on to find out where the doubts about PHP feasibility may stem from and what alternative languages can be considered for your project. For a more informed decision, feel free to consider our offer in PHP development services.

PHP was first introduced in 1995, and language has had multiple upgrades since then. Today, it’s a widely used web development language across industries. However, PHP peculiarities pose their own challenges that you have to consider before using the language for your project. First of all, PHP is less focused and more forgiving language. For example, just like JavaScript, PHP allows developers not to define variable types, which can easily result in errors in code, if the team lacks enough proficiency. Also, since interpreted and not compiled, PHP a bit slow in execution.

As a result, you may consider abstaining from PHP when starting a web development project. And the claims of some developers that the language doesn’t have a clear philosophy and is designed to keep things going at all costs are likely to add to your doubt.

We at ScienceSoft have developed in PHP since 2005 and have more than 75 successfully completed PHP projects. Having been in web development for 14 years, I’m sure that, in the hands of professionals, it’s the best language for most web-based projects. Still, if you’re in doubt whether PHP is the right language for your development initiative, I present my list of top three PHP alternatives. 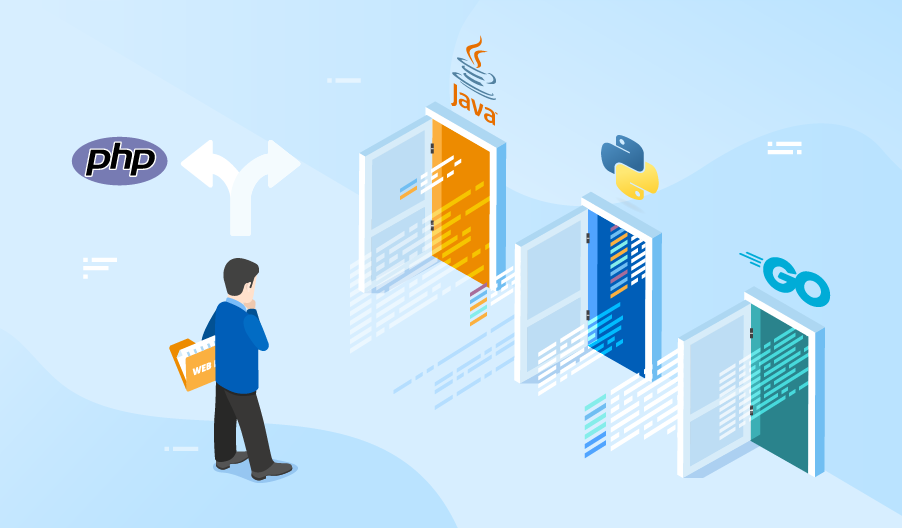 Some of the popular alternatives to PHP include Java, Python, and Go. Here are the salient features of these languages.

Python is extensively used by many world companies like Google, Toyota and Dropbox, and it was named the most popular programming language in 2019, according to IEEE Spectrum. The language is increasingly used across industries when there’s a need for processing and management of large data sets. Thus, it shines when it comes to writing automation scripts and analytics systems, introducing machine learning capabilities, and more. Python’s pre-built web functions also significantly boost the speed of software development.

Doubt whether to choose PHP or an alternative for your project?

ScienceSoft’s team is ready to carry out a detailed analysis of your development needs.

Go, or Golang, is a new language compared to PHP, Java, and Python. Developed by Google in 2007, the purpose behind its development helps in understanding its usefulness: Go was developed out of a need for a scalable solution. Go’s simple syntax, advanced support of concurrency and parallelism make it a good option for building large distributed applications.

How to Choose a Suitable Language

In any development initiative, it’s important to carefully map your software needs against the capabilities of the development language. If you need help with determining what programming language would best suit your project goals and meet your budget expectations, feel free to contact our team.