Software performance glitches affect the experience of users with software, causing companies to lose customers and revenue and limiting organizations’ possibilities to scale. To make sure your software successfully handles expected traffic volumes and remains stable during user activity surges, I recommend including performance testing in the testing scope and carrying out relevant types of performance testing already at the beginning of the development process. 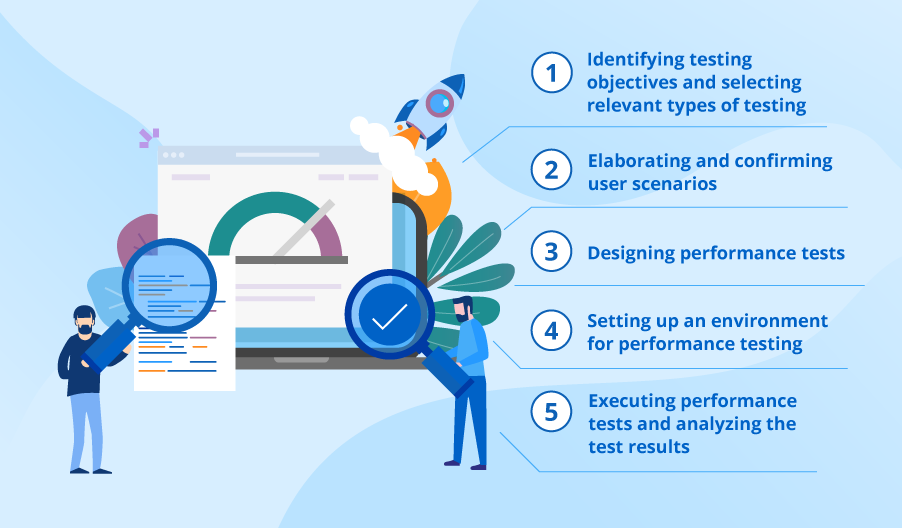 If you are interested in checking software behavior under normal circumstances and for the expected traffic, go for load testing. Opt for stress testing to check an application’s performance with the traffic considerably exceeding the expected load. Add scalability testing to the testing scope to measure an application’s capacity to scale with more traffic load being applied to it. And in order to check whether software remains stable over an extended time, including 24/7 operations, perform stability testing.

As the next step, performance test engineers should design comprehensive user scenarios for key user roles. They should collaborate with BAs, the product owner, and other project stakeholders in order to select the user roles most relevant to performance testing and rely on them to emulate user actions. For instance, validating the performance of an ecommerce solution for one of our customers, we singled out such user roles as a guest user, a logged-in user, and a repeat customer, and designed the following scenarios: logging in or signing up for an account, reviewing previous orders, searching for items in a product catalog, viewing product page details, adding a product to the cart, etc.

4. Setting up an environment for performance testing

It is also important to keep the test environment isolated since real user activity may influence the accuracy of test results and make it difficult to identify the root causes of performance issues.

Best practices for ensuring the reliability of test results

Stable software performance is the key to positive user experience particularly critical for ecommerce businesses, for example. Thus, it’s vital to check that your application shows consistent performance under expected and peak load, as well as offers possibilities for scaling – and ScienceSoft’s performance testing team is always ready to help with the task, just leave us a request.

We carry out load, stress, scalability, and stability testing to validate software compliance with its performance requirements.

Top Software Testing Trends to Watch For in 2022