In IoT since 2011, ScienceSoft has been providing outsourced QA services for 20 years and software testing services for 33 years.

The actual IoT testing setup plan will vary depending on the IoT solution’s requirements, the chosen development model, the current SDLC stage of your IoT project.

However, ScienceSoft’s testing experts have outlined some common stages to go through.

Then, the QA manager should carefully consider possible IoT testing risks and design an all-around risk mitigation plan for your project. Among the risks there can be:

Preparation for the IoT application testing process differs based on the sourcing model you opt for: in-house testing or outsourced testing.

The assigned QA manager designs an overall IoT test strategy and plan, including effort estimation. As an IoT system’s architecture is prone to changes, the QA manager needs to regularly revise and update the test artifacts accordingly.

Then, the manager assembles an IoT testing team or teams.

Besides, to avoid time- and data-intensive repetitive test cases execution, an IoT testing project requires a balanced combination of manual and automated testing. A separate team should be assembled to take over automated testing.

Test engineers validate the functionality of:

To ensure an IoT application’s resilience to hacker attacks, a cybersecurity engineer reviews the security of the system architecture, performs the vulnerability assessment and penetration testing.

To safeguard the entire IoT system’s cyber-security, you can also opt for the security testing of:

Additionally, your IoT test plan may include performance testing to:

If you realize your in-house resources are insufficient for overarching IoT app testing, you can consider its outsourcing, as it proves to be more cost-effective than hiring and training the additional test engineers on payroll.

To select a fitting vendor, you should:

To get IoT testing started, testing teams design test cases and develop test scripts. Then, to check the end-to-end entire system’s functioning, an IoT test lab is created with the help of chosen service virtualization tools and simulators.

With 33 years in software testing services and 10 years in IoT solutions delivery, ScienceSoft’s QA experts can promptly get into your IoT solution’s specifics (within 3 weeks) and ensure its high quality.

Get an IoT testing consultation

ScienceSoft conducted penetration testing on our iOS and Android IoT Apps as well as 2 IoT smart devices (indoor and outdoor security cameras), which are powered by Tuya. The Apps and the devices alike were tested thoroughly and rigorously. Throughout the testing process, ScienceSoft’s team was always very responsive and very helpful. We were much satisfied with the professional performances of ScienceSoft and we are more confident of our system, as it was rated in the high security level, software and hardware, by ScienceSoft. We do appreciate the professionalism of ScienceSoft people. 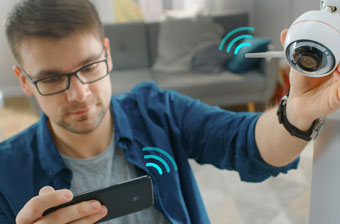 ScienceSoft’s penetration testing team helped the Customer find minor vulnerabilities in the IoT apps and provided recommendations on how to handle them. ScienceSoft estimated the overall security level of the apps and devices as quite high, and the Customer could confidently continue to provide their services.

Test lead (one per each testing team)

Note: the actual number of test engineers within each testing team will be subject to the IoT module’s functional and tech complexity.

Cybersecurity engineer (for the entire project)

ScienceSoft’s testing specialists will get into your IoT testing needs within 1-3 days; set up the test environment, write test scenarios and test scripts and start automated testing activities within 3 weeks.

Being ISO 27001 certified, we guarantee the safety of your data. ScienceSoft uses VPNs, SSLS, and encryption protocols combined with our internal security measures to protect your sensitive information.

For an in-house option

For an outsourced option

As an example, we can take a testing project for a company manufacturing automotive engines having 4 factories across a country. Each smart factory has 6 departments with 5-10 machines equipped with IoT sensors. The sensors measure the machines’ temperature, vibration, run time, operating speed, and product output. The IoT cloud-based event-driven application enables near real-time monitoring of the factories’, departments’, and machines’ performance; OEE and other KPIs’ visualization in reports and dashboards. The company requires a single-round acceptance testing.

Get a Clear Picture of Your IoT Testing Budget!

ScienceSoft is a global IT consulting, software development, and QA company headquartered in McKinney, TX, US. We deliver outsourced QA services for IoT testing projects to help our customers ensure smooth functioning, robust integrations, scalability, and security of their IoT solutions. Being ISO 9001 and ISO 27001 certified, we rely on a mature quality management system and guarantee that cooperation with us does not pose any risks to our customers’ data security.