Types of Software Testing: 3 Classifications with Explanations and Practical Tips

Every software development project is unique in terms of its testing scope and the prioritization of testing activities. To deliver quality software in due time and at an optimal cost, QA teams combine varied testing approaches and types. In this article, we have leveraged our three-decade experience in software testing to guide you through the common testing types and shared patterns of balancing different types of testing in a software development project.

To provide a well-rounded picture, we grouped the testing types according to 3 criteria: testing aims, automation level, and formalization level. 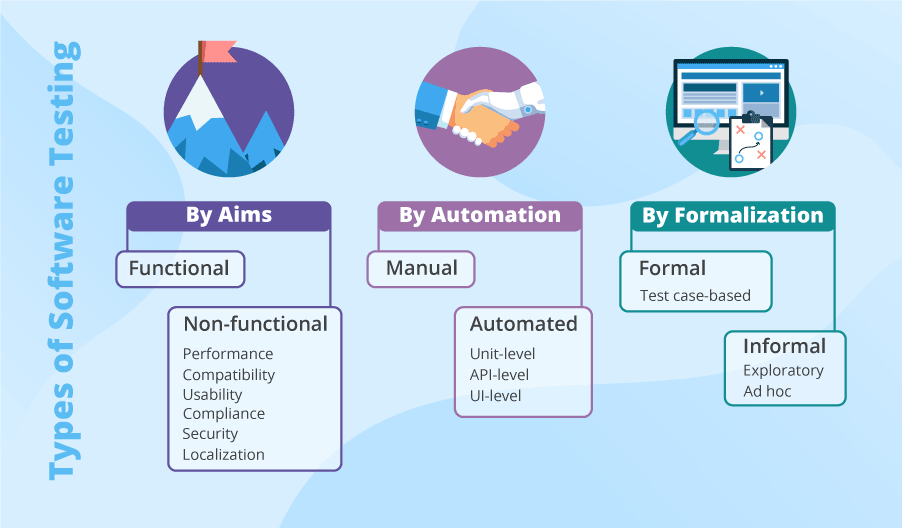 Types of testing by aims

Performing functional testing, test engineers verify that the functionality of software complies with the requirements specification. To test features, test engineers provide an application with a certain input and verify an output against the expected result without getting to know the inner structure of the item under test.

To have the testing scope under control, test teams can resort to risk-based testing, which means prioritizing testing activities based on the probability and aftermath of potential defects.

Types of testing by automation level

Self-explanatorily, manual testing stands for the manual execution of tests to validate functionality, usability, and other relevant aspects of software against the requirements specification. For that, test engineers usually create test cases. Test cases describe scenarios to be validated, the steps to be executed, prerequisites, test data, and an expected result.

A well-rounded test automation strategy calls for the automation at the following levels:

Test cases that are executed frequently and do not change much with each iteration are good candidates for automation. Automated testing also applies to user scenarios that need to be tested with a number of varied data inputs.

In its turn, manual testing is well applied for validating new, complex or changing functionality. Automating testing of unstable or too complex functions may be challenging, hence, time and investments needed for automation may outweigh the actual benefits.

Types of testing by formalization level

Test engineers design test cases in advance and rely on them during test execution. Test engineers compare the actual result against the expected result (stated in a test case and derived from the requirements) and state a pass or fail verdict.

This type of testing presupposes no formal test preparation, recognized test design technique or expected results. Testing is carried out informally and test engineers are not required to obey a particular workflow.

Any development project presupposes the combination of exploratory, test case-based, and ad hoc testing. Exploratory testing is well-suited at the early stages of a project, as it allows test engineers to gain familiarity with an application and develop ideas on how the app is to be tested. Once testers have gained the required knowledge and informally experimented with test procedures, they may start with formalization. Later in the development life cycle, when testers are well-acquainted with software, they perform ad hoc testing to find obscure defects.

In this article, we have provided a general overview of different testing types and outlined the basic principles of test prioritization. To advance in the domain, check out our software testing and QA blog – we offer a closer look at the mentioned testing types and discuss other non-trivial issues.

System testing: how to check the external & internal integrations