System testing: how to check the external & internal integrations

Editor’s note: With ever growing complexity of business software ecosystems, on the one hand, and the established popularity of distributed architectures, on the other, the importance of integration testing grows. It ensures smooth end-to-end functions and robust data sharing between isolated software modules and different integrated solutions. Ihar shares a real-life example of component and system integration testing, being an essential part of a comprehensive system testing project. If you also need to validate the internal and external integrations of your software, you can consider ScienceSoft’s software testing services.

It is hardly possible to use software that fails to connect to third-party enterprise systems or whose modules fall apart. To prevent such issues, testing teams thoroughly validate the software integrations, while performing the system testing.

The project featured a B2C e-store for a large multi-industry company running chains of gas stations along with roadside diners, gardening centers, as well as retail and wholesale stores. The customer already had a B2B e-store and an ERP system with affiliated BI and accounting modules. The new e-store had to be integrated with these systems.

As the project proceeded, the customer asked the development team to add new functionality to the ERP system. These were invoices to be sent to the customer’s buyers and suppliers. Meanwhile, the existing B2B e-store had to remain fully functional. To help this, the project team reproduced a copy of the production database and worked in an emulated test environment.

To validate the system's integrations efficiently, the testing team mapped the project structure: 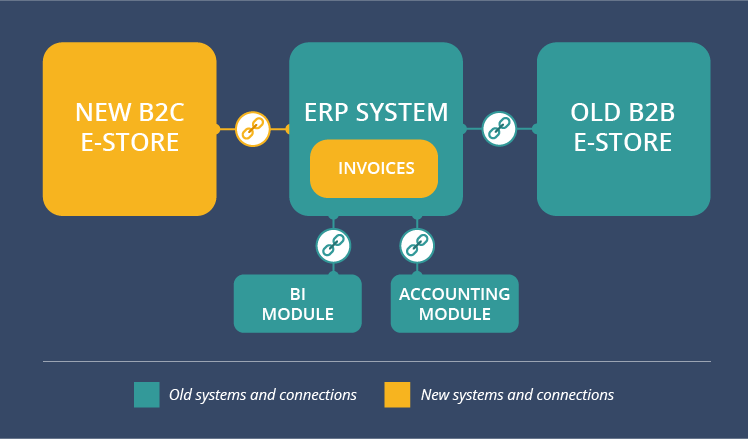 When deciding if they are going to automate the testing process, the team was in two minds. On the one hand, automation reduces time and efforts for repeatable tasks requiring extensive concentration. On the other hand, automation of integration tests can be tricky. To be effective, it requires substantial sets of repeatable or at least predictable data. In our case, ERP system was updated with new diverse items every other day. Pricing policy (discounts, sales, loyalty programs, etc.) also changed oftentimes. So, the team opted for manual system testing with the focus on software internal and external integrations.

Need to Validate Your Software Integrations?

ScienceSoft’s testing experts can quickly dive into your project, analyze the feasibility of test automation for it, plan out and perform all-around system testing or validate the software external and internal integrations specifically.

The development team deployed Invoices, a new functional block of the ERP system. These invoices had to be sent to the customer’s buyers and suppliers. The team had to assure that the invoice unit was able to process queries from the ERP system. Key queries concerned purchase, sale and return procedures.

After the testing team fully understood the scope of work, they developed manual test cases (20) to cover the interactions above. Component integration testing discovered a number of critical bugs. Most spectacular defects considered incorrect pricing for Return procedures (both incoming and outgoing).

For example, the new module didn’t process discounts. If a product was on sale, the customer received the invoice featuring the regular price. Another critical defect concerned VAT. Invoices contained amounts of VAT different from those in the waybill. This could hurt the customer’s reputation badly.

Some defects could hamper the ERP Administrator’s work. For instance, ERP failed to browse edited invoices (incoming and outgoing) showing an Error message.

Bugs fixed, the testing team continued with a trickier case of integration: new e-store and the ERP system.

This type of testing had to verify that the ERP and the new e-shop were seamlessly connected and responded to mutual queries. Most important integration points included:

The success of integration testing for these modules was critical. If something went wrong, the e-store customer UX would be hampered.

Testing uncovered various integration issues with the severity ranging from medium to critical. The most important bug was the e-store crashing when an e-shopper added an item to the cart. Another critical bug covered the e-store’s inability to process the amount due for several items when the user pressed Enter button.

As for bugs of medium severity, the most significant one considered the rounding of the amount due. While for users this bug was insignificant or even pleasant (in case of rounding towards a lower cost), it wreaked havoc in the customer’s accounting module. Verifying that the accounting documents and the ERP data added up involved considerable efforts of the manual testing team.

All in all, integration testing in the project took about 15% of overall testing efforts.

Testing the software integrations is a complex set of two-fold testing activities that should be a part of any system testing project. It covers component integration within one system and system integration with external systems. Integration testing requires an effective strategy based on:

Though real-life examples tend to be more vivid than detailed theoretic explanations, each testing project is different and requires through expert analysis to meet its goals. Fueled up by 33 years in software testing and 20 years in QA consulting, ScienceSoft's team can help you decide on the most cost-and time-effective approach to integration testing, just drop us a line.

A software testing vendor with 33 years of experience, we will render comprehensive integration testing to make sure the components of your software interoperate correctly.