Apache Cassandra vs. Hadoop Distributed File System: When Each is Better

Apache Cassandra and Apache Hadoop are members of the same Apache Software Foundation family. We could have contrasted these two frameworks, but that comparison would not be fair because Apache Hadoop is the ecosystem that encompasses several components. As Cassandra is responsible for big data storage, we have chosen its equivalent from the Hadoop’s ecosystem, which is Hadoop Distributed File System (HDFS). Here, we’ll try to find out if Cassandra and HDFS are like twins who are identical in appearance and just bear different names or they are rather a brother and a sister who may look similar, but still are very different. 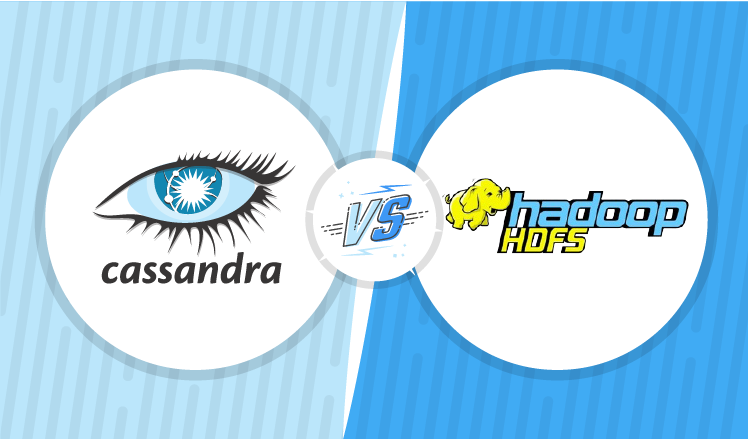 Before we dwell on the features that distinguish HDFS and Cassandra, we should understand the peculiarities of their architectures, as they are the reason for many differences in functionality. If you look at the picture below, you’ll see two contrasting concepts. HDFS’s architecture is hierarchical. It contains a master node, as well as numerous slave nodes. On the contrary, Cassandra’s architecture consists of multiple peer-to-peer nodes and resembles a ring. 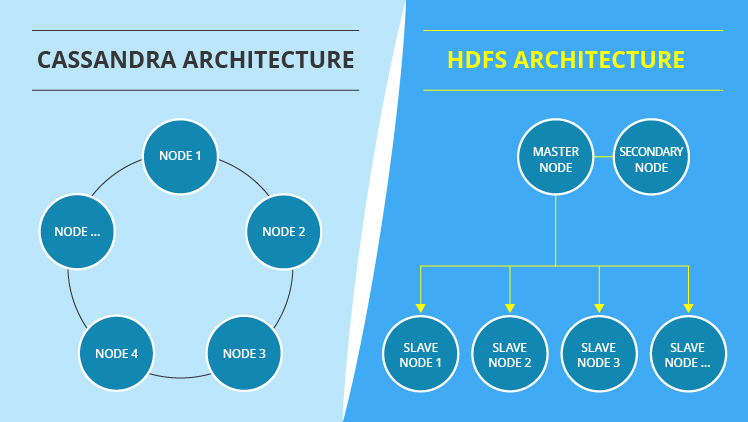 Both HDFS and Cassandra are designed to store and process massive data sets. However, you would need to make a choice between these two, depending on the data sets you have to deal with. HDFS is a perfect choice for writing large files to it. HDFS is designed to take one big file, split it into multiple smaller files and distribute them across the nodes. In fact, if you need to read some files from HDFS, the operation is reverse: HDFS has to collect multiple files from different nodes and deliver some result that corresponds to your query. By contrast, Cassandra is the perfect choice for writing and reading multiple small records. Its masterless architecture enables fast writes and reads from any node. This makes IT solution architects opt for Cassandra if it is required to work with time series data, which is usually the basis for the Internet of Things.

While in theory HDFS and Cassandra look mutually exclusive, in real life they may coexist. If we continue with the IoT big data, we can come up with a scenario where HDFS is used for a data lake. In this case, new readings will be added to Hadoop files (say, there will be a separate file per each sensor). At the same time, a data warehouse may be built on Cassandra.

Both HDFS and Cassandra are considered reliable and failure resistant. To ensure this, both apply replication. Simply put, when you need to store a data set, HDFS and Cassandra distribute it to some node and create the copies of the data set to store on several other nodes. So, the principle of failure resistance is simple: if some node fails, the data sets that it contained are not irretrievably lost – their copies are still available on other nodes. For example, by default, HDFS will create three copies, though you are free to set any other number of replicas. Just don’t forget that more copies mean more storage space and longer time to perform the operation. Cassandra also allows choosing the required replication parameters.

However, with its masterless architecture, Cassandra is more reliable. If HDFS’s master node and secondary node fail, all the data sets will be lost without the possibility of recovery. Of course, the case is not frequent, but still this can happen.

In terms of data consistency, HDFS and Cassandra behave quite differently. Let’s say, you ask HDFS to write a file and create two replicas. In this case, the system will refer to Node 5 first, then Node 5 will ask Node 12 to store a replica and finally Node 12 will ask Node 20 to do the same. Only after that, the write operation is acknowledged. 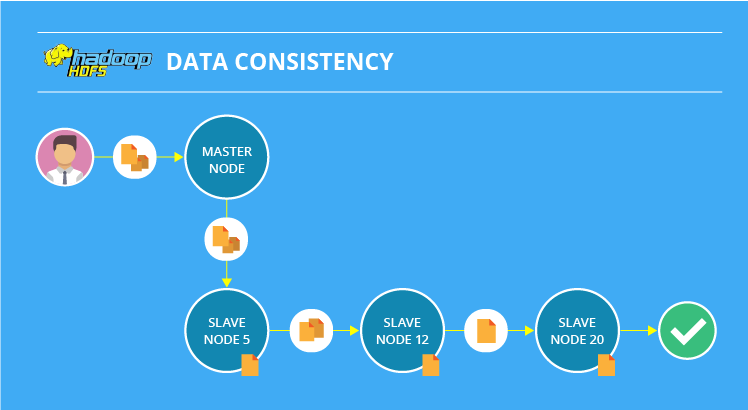 Cassandra does not use HDFS’s sequential approach, so there is no queue. Besides, Cassandra allows you to declare the number of nodes you want to confirm the success of operation (it can range from any node to all nodes responding). One more advantage of Cassandra is that it allows varying data consistency levels for each write and read operation. By the way, if a read operation reveals inconsistency among replicas, Cassandra initiates a read repair to update the inconsistent data. 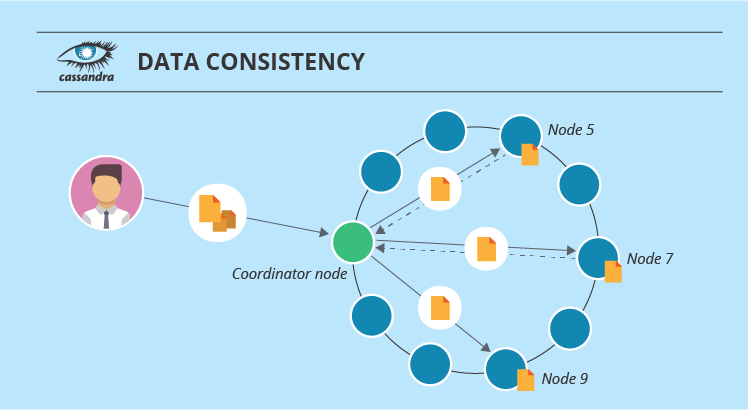 As both systems work with enormous data volumes, scanning only a certain part of big data instead of a full scan would increase the system’s speed. Indexing is exactly the feature that allows doing that.

Both Cassandra and HDFS support indexing, but in different ways. While Cassandra has many special techniques to retrieve data faster and even allows creating multiple indexes, HDFS’s capabilities go only to a certain level – to the files the initial data set was split into. However, record-level indexing can be achieved with Apache Hive.

Both designed for big data storage, Cassandra and HDFS still have to do with analytics. Not by themselves, but in combination with specialized big data processing frameworks such as Hadoop MapReduce or Apache Spark.

Apache Hadoop’s ecosystem already includes MapReduce and Apache Hive (a query engine) along with HDFS. As we described above, Apache Hive helps overcome the lack of record-level indexing, which enables to speed up an intensive analysis where the access to records is required. However, if you need Apache Spark’s functionality, you can opt for this framework, as it is also compatible with HDFS.

Cassandra also runs smoothly together with either Hadoop MapReduce or Apache Spark that can run on top of this data storage.

HDFS and Cassandra in the framework of CAP theorem

According to the CAP theorem, a distributed data store can only support two of the following three features:

If we look at HDFS and Cassandra from the perspective of the CAP theorem, the former will represent CP and the latter – either AP or CP properties. The presence of consistency in Cassandra’s list can be quite puzzling. But, if needed, your Cassandra specialists may tune the replication factor and data consistency levels for writes and reads. As a result, Cassandra will lose the Availability guarantee, but gain a lot in Consistency. At the same time, there’s no possibility to change the CAP theorem orientation for HDFS.

If you are to make a choice between Apache Cassandra and HDFS, the first thing to take into account is the nature of your raw data. If you have to store and process large data sets, you can consider HDSF, if multiple small records – Cassandra may be a better option. Besides, you should form your requirements towards data consistency, availability and partition tolerance. To make a final decision, it’s critical to understand the exact use of big data storage.

Even if Cassandra seems to outperform HDFS in most cases described, this does not mean that HDFS is weak. Based on your business needs, a professional Hadoop consulting team may suggest a combination of frameworks and technologies with HDFS and Hive or HBase at core that would enable great and seamless performance.

Need professional advice on big data and dedicated technologies? Get it from ScienceSoft, big data expertise since 2013.

Send us your request