COBIT vs ITIL: a real-life example of what these two can do

If you're thinking about ITSM implementation but you're unsure which framework you need, here, we'll try to help you by comparing ITIL and COBIT within an enterprise on a real-life example. But before making any practical comparisons, let’s briefly turn to the ‘theoretical’ difference between COBIT and ITIL. 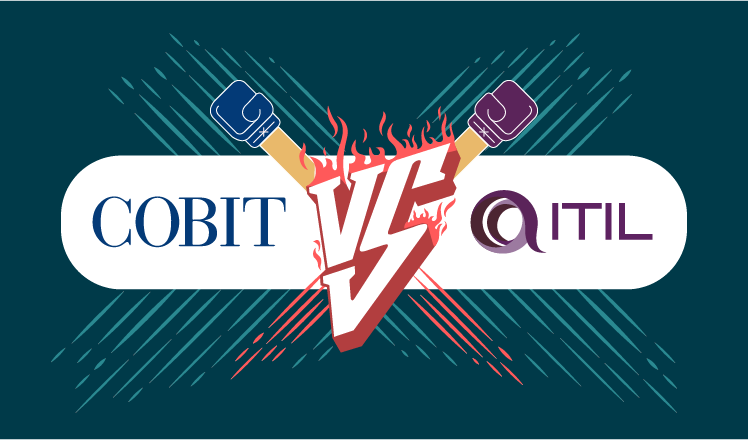 ITIL vs COBIT. The difference

COBIT is a set of practices for top management to understand how they should approach their enterprise IT. And ITIL is a roadmap of exactly what should be done to organize IT employees’ daily processes.

The first thing to mention is that COBIT and ITIL cover pretty much the same area. Although, it would be wrong to say that they both are only about ITSM because COBIT is a bit broader than just that.

This is the key point. COBIT’s approach to IT is from the business side (top down), while ITIL is looking at the matter mostly from the IT perspective (bottom up). Besides, COBIT distinguishes between the management and governance of IT. The former is like a tactic, while the latter is more of a strategy. And from COBIT’s point of view, ITIL deals with management, while COBIT itself mainly applies governance.

COBIT’s main aims are for business to control enterprise IT and set the right direction for it. Besides that, it means to align business goals with IT goals, bring IT value to business (preferably in the form of financial profit) and manage resources, risks and IT efficiency.

While ITIL mainly aims to organize IT services on the whole and IT departments’ work in particular and provide an opportunity for constant operational perfection.

A real-life example to make it simple

Now that we’ve outlined the difference between these IT ‘guidance’ frameworks (ITIL and COBIT), let’s look at their usage on a real-life example. To do that, let’s imagine a company, say, MN Logistics Group, an international logistics enterprise working mainly in the US and Canada. It’s a large company that employs 15,000 people and has offices in 20 locations. They used to be one of the leaders in the field but now, due to numerous problems, they are facing a serious crisis.

Here are some of the problems that the company is facing and their COBIT-provided solutions:

Here’s how ITIL can solve the problems that IT teams in MN Logistics face and cause:

So, ITIL vs COBIT or ITIL and COBIT?

As you can see, these two work closely together and, generally speaking, aim at one thing: making IT stable and efficient. But it doesn’t mean that this is the only way they look good: ITIL and COBIT work pretty well separately.

You may think that it is weird to use a tactic (ITIL) without a strategy (COBIT). But you should not forget that ITIL also provides ‘strategic’ basics for IT services organization, which are more than enough at early stages. Besides, judging by the differences in their approaches, definitions and, most importantly, objectives, COBIT feels more like a framework for large and more IT-mature enterprises. It needs a huge number of IT processes and a substantial enterprise IT to govern. While ITIL can be a good first step to achieving such scope on the whole and a high level of IT maturity in particular.

So if you’re thinking what to go with – COBIT vs ITIL or ITIL and COBIT – it’s all very simple: the first stage of your ITSM implementation project should probably be ITIL. And when you thoroughly learn your way around it, you can start thinking more globally, thinking COBIT.

Need a better way to manage your IT? Hit the button below and find out how we can make your IT management efficient and crystal clear.

IT Service Management
What Processes Does ITSM Foster and What Do They Do? Clarification Is Below