The Customer is an American company that has been offering language learning solutions to users in over 175 countries since 2012. Their mission is to revolutionize the way people learn languages and assist travelers in everyday communication.

To stand out in the market of travel apps with their innovative linguistic vision, the Customer needed to create a travel-oriented language learning solution comprising a web portal and mobile apps for iOS and Android. The Customer expected the apps to provide a text-to-speech feature with native speakers’ pronunciation, implying the use of large amount of media data. As for the web portal, the Customer didn’t have specific requirements, which posed a challenge on its own.

ScienceSoft developed a solution consisting of Android and iOS apps, which serve as interactive travel phrasebooks, and a learning web portal, where users can take their language skills further.

The final apps offer translation into 8 languages and allow users to:

Just as the Customer requested, ScienceSoft implemented the text-to-speech feature as well. Each word and phrase block in the app are linked to multiple audio files with native speakers’ pronunciation of the words in their own language. When a user wants to listen to a standard or a custom-built sentence in a particular language, the app assembles and plays the audios for all separate words in sequence. 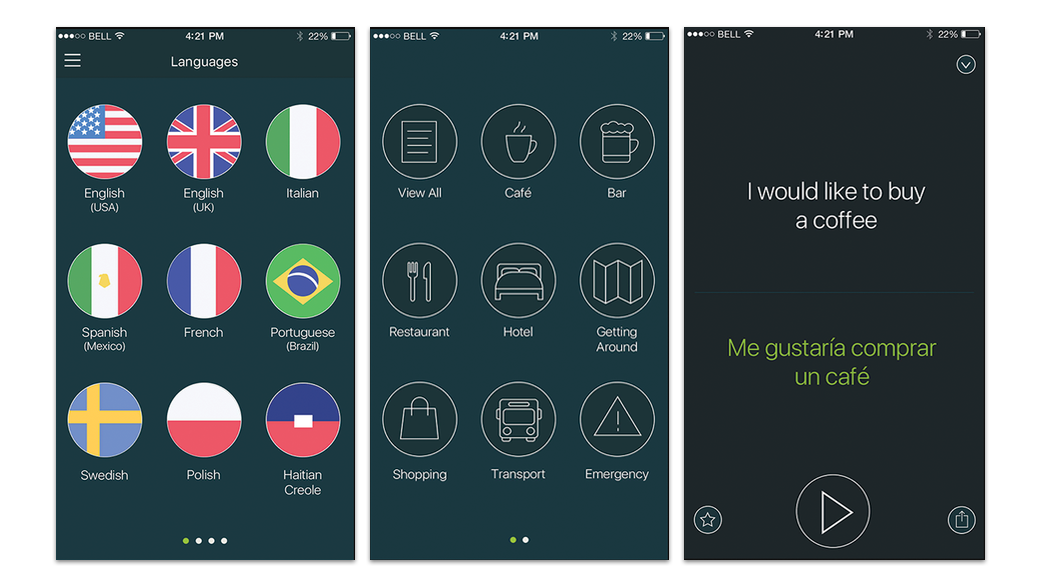 To let the apps remain lightweight (~40MB each) yet give users convenient access to all necessary media files, including the immense number of audio files, the Cloudflare content delivery network (CDN) was set up.

The web portal goes further than the apps in terms of the learning content while staying true to the principle of prioritizing conversational skills. It also allows users to register and create personal learning spaces.

Due to the absence of solid requirements, many features of the web portal had to be defined and fine-tuned on the fly. Agile development methodology allowed for flexibility that helped ScienceSoft’s web developers to successfully implement the portal.

The learning portal’s administration panel also allows the Customer to:

Thanks to the responsive UI created by ScienceSoft designers, the web portal conveys seamless user experience across all popular desktop and mobile browsers.

Since the web portal was supposed to run on a subscription-based model with a free trial, ScienceSoft also integrated it with Stripe Billing engine, thus ensuring secure money transactions.

The apps received a number of prestigious awards in such categories as Best Education, Best Travel, and New Education Apps in Italy, Australia, New Zealand and Southeast Asia. Currently, both iOS and Android apps are listed as #1 Education App in App Store and Google Play of 10+ countries.

The Customer scheduled the official release of the web portal for a later date.