Minimum Viable Product (MVP) Development: How to Get Started

How to minimize risks

'Minimum' and 'viable': How to prioritize the features

How much you should invest

Even the most delightful software product idea that popped in your head turns into a huge burden the moment you start thinking about putting it into life. Developing a minimum viable product – or MVP – can be a great point to start.

An MVP is your first step of software product development since it’s your product’s test version. You don’t strive to implement your entire idea at once and instead focus on creating its core first. By the means of continuous updates, your MVP will be gradually evolving and turning into a full-fledged product.

With hundreds of successful MVP development projects behind our back, we knowingly describe the challenges of making your first steps toward creating an MVP and help you to embark on the initiative decisively. 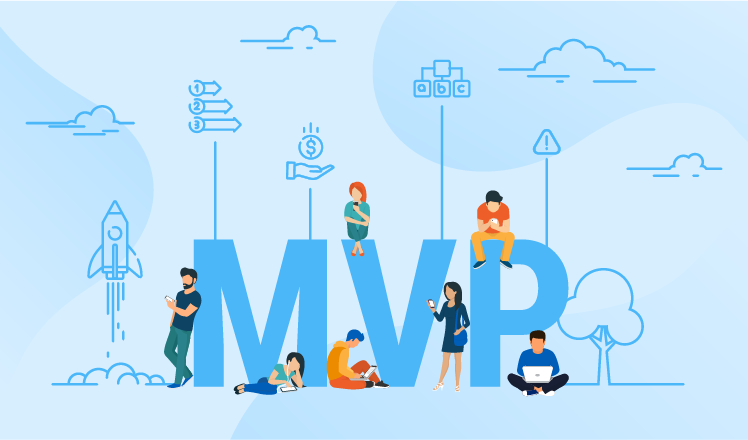 What type of a minimum viable product you need

To make the first step in MVP development, you should first understand what type of it works best for your concept. Below, we list three MVP types that are most suitable for software products.

The ‘landing page’ is a peculiar type of MVP, since it’s just text, a presentation, or a video that targets a wide audience of potential customers and describes the concept of your product as if it were already developed. Many companies, including Dropbox, entered the market with such a concept description alone, with no single line of code behind it.

The landing page MVP allows introducing your idea to the real public and get real feedback with the lowest investments possible. The received feedback – by means of requests or sign-up forms – can help you to improve your vision and tailor it to future customers’ expectations before you invest in software development. What’s more, you can analyze the interest of the audience in the features and prioritize their development accordingly.

Of course, there’re always risks that while you’re promoting your yet unimplemented ideas, they can be noticed and picked up by a competitor. The risks are especially high if you’re bringing in some innovations to the market. That’s why you should plan to shortly follow up the landing page MVP with any of the three MVP types below.

Just as the name suggests, you have to focus on the implementation of one single feature for this type of MVP. You may doubt the practicability of this approach and wonder who would need software with the functionality limited this much. However, the concept proves to be successful. The famous AR game Pokémon Go, for one, was released with only one feature available, became wildly popular, and expanded its functionality greatly over a few years.

The key to success, however, is to choose the one feature that would be of great use. Even if you think the sheer value of your concept is in the richness of wisely picked features, there’s always the core, which your target audience would treasure most.

A ‘piecemeal’ is software combined of various already existing parts. With this type of MVP, you strive to reuse as many ready-made elements (those created by you in the previous projects or those widely available) as possible in order to cut down the time and efforts for building your own software.

Taking open-source code pieces instead of writing code from scratch and using standard interface templates instead of creating an original design are basic procedures here. At a later date, you’ll most likely update the reused parts, but for now, the objective is to give your idea a basic functional form, sacrificing the elegance of code and originality of user interface.

If your product’s functionality is supposed to be something unique on the market, this MVP type won’t work. However, if you’re trying to win the market by rethinking existing ideas – reusing basic material can help you to focus on implementing the improvements only.

A 'Flintstone' MVP suggests faking the automation of processes you want your future software product to perform and handling them manually behind-the-scenes.

For instance, you want to create a SaaS product that allows a company to easily manage mass mailing. By applying the ‘Flinstone’ MVP strategy, you advertise an automated mass mailing software solution and have your employees handle the mass mailing tasks manually.

Such MVP type uncovers whether the concept of your product has the chances to catch on with the market. Yet, it’s quite risky since, in case the idea turns out successful, you can be overwhelmed with the processes that need to be executed without any automation.

How to minimize risks

You can significantly minimize the risks of MVP failure by doing in-depth research of the industry of your future product. Prior to the development, you should be aware of whether your MVP will have a chance to survive on the market and gain an audience. Closely analyze all competitors and, especially, market leaders: the more monopolized the market, the higher the risks of trying to enter it, so stay realistic.

Make sure your MVP doesn’t just solve an existing user problem but also has at least one Unique Selling Point (USP) that distinguishes it from your competitors. A USP can be a new feature, a new approach to performing a task, an option to integrate with another certain product or just a more stable performance. The way you can stand out in the market depends on your idea, user needs, and existing offers.

Lastly, search for a reliable software vendor who will help you to reflect your concept in the form of software and deliver a quality MVP. Look for the developers who know the industry of your product and are well versed in both technical and organizational processes. Take your time with the decision: it will be convenient for you to continue working on MVP evolution with the same vendor, so choose your business partner wisely from the very start.

'Minimum' and 'viable': How to prioritize the features

The biggest challenge of MVP development lies in its name, since shrinking your vision and achieving the right balance between minimum and viable isn’t easy. To create a product with the functionality that would be both basic and competitive, thorough research and rigorous planning are paramount yet again. Examine existing products similar to yours (as well as user impressions from these products) and reach out to your future user base to understand what features they need and are willing to pay for.

With the collected information, you can divide all possible software product features into 4 main groups: must-have, should-have, could-have and won’t-have (also known as the ‘MoSCoW’ method).

A single one or a limited set – must-have features comprise your MVP software. The right choice of these features is what should make the MVP both basic and practical and may as well define its future. To back your choice of features, you should obtain sufficient factual data about the market and the needs of your users; thorough market research or the landing page MVP can be helpful in that.

Meant for expanding your product vision, these features are in the queue for future software updates of your already released MVP. Each feature in the should-have list needs to have its priority level so that you could plan their implementation step by step and gradually introduce them to your constantly evolving product.

These are the features that are generally associated with the product like yours and are probably present in the products of your competitors. Yet you aren’t planning to include these features in your product any time soon.

You can have your reasons not to do so. For example, the research uncovered that although a certain feature is usually included in similar products, the users show very low interest and need in it. Or, for instance, this certain feature is technically incompatible with another feature in your must-have or should-have lists.

How much you should invest

MVP development is supposed to protect you from great financial losses in case of a market failure. Per our estimation, the investments for creating a minimum viable product should be approximately 10 times lower than those for a product development. Say, if the complete implementation of your software product idea would cost you around $150K, the approximate investment for an MVP should be around $15K.

With most kinds of MVP software, you should try not to exceed the margin of $50K for as long as possible to adhere to the ‘minimum’ part of the MVP idea. While deciding whether to invest more or not, remind yourself that you develop a first test version that will most likely be changed according to the customer demands and feedback. You’re not striving to develop impeccable software at this point, so there’s no reason to go all out.

Once you release your MVP to the wide audience, don’t let the negative reviews get you down. If you have user criticism, you’ve accomplished the purpose of MVP. Now focus on monitoring the situation closely: read user reviews, communicate directly with the customers, especially those who are unsubscribing from your services or slowly abandoning your product. In other words – look for all the possible ways to collect user input in order to understand how to improve your software and then proceed to necessary adjustments.

If your research was insufficient, your MVP could turn out not to belong to the market and have no audience at all. As the product owner and concept creator, you may want to believe that an absolute lack of interest in your software is due to the scant nature of an MVP, which hasn’t conveyed your full vision yet. However, it’s important to accept failure too. Pivoting is a wise decision that is also behind many successful software product stories.

Developing a minimum viable version of your product may turn out to be even more difficult than implementing the entire idea since you’ll have to find a smart way to shrink the concept while preserving its appeal. Considering the MVP type, prioritizing the features, and minding the investment and the risks will help you to think ‘minimum’ and ‘viable’ at the same time.

Once you find the tricky balance and successfully hit the market with the first version – you can start working on the updates that will evolve your software and gradually turn it into that inspiring complex concept in your head.

Got a great idea for a product? Our experienced software development teams are ready to help you put it into life!