Inventory optimization headache and how to approach it with data science

How is your inventory optimization doing? At best, it needs a bit of improving. At worst, it is your headache. Anyway, in both cases, you may want to know the recent achievements in the field. And that’s what our data science team can show you in this overview of different approaches to inventory optimization. 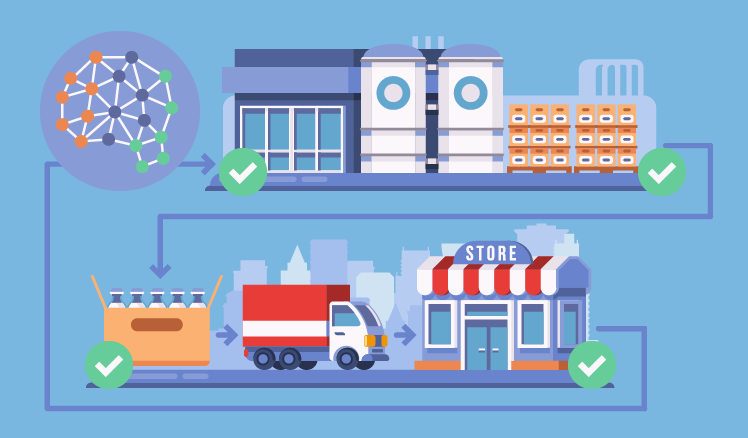 Though we are data science evangelists, we don’t claim that it’s a silver bullet. Data science shows splendid results only if applied wisely and to the purpose. Below, we describe three vastly different approaches to inventory optimization, whose efficiency varies dramatically. We explain these approaches from the perspective of retail, still manufacturers and distributors can use them, too.

1. Adding a safety buffer to the forecasted demand figures

This is the simplest, yet the least efficient approach. Say, you apply the most advanced data science method to forecast demand. Your most intricate predictions for a certain SKU tell you that tomorrow you’ll sell 3,286 bottles of milk X in a particular store Y. But you keep in mind that demand is always uncertain and potentially you’ll be able to sell either more or less. So, you decide to deal with this demand uncertainty by letting your category managers add a safety buffer to the forecasted figures.

The category manager decides to add 15% to the projected quantity. As a result, they order 3,779 bottles not having weighed holding costs against out-of-stock costs. Later, the amount of milk you manage to sell turns out to be close to the initial forecast and the company ends up with overstock. What’s more, holding costs for this milk turn out to be high. This doesn’t sound like a success story in inventory management. Naturally, such safety buffers are not the way to go since they make companies dependent on their category managers’ gut feeling.

2. Calculating optimal inventory based on the known probability distribution of demand

Contrary to the previous approach, this method considers the costs of stock holding and stock shortage. However, demand uncertainty is still a challenge, which companies try to solve by calculating demand probability distribution. 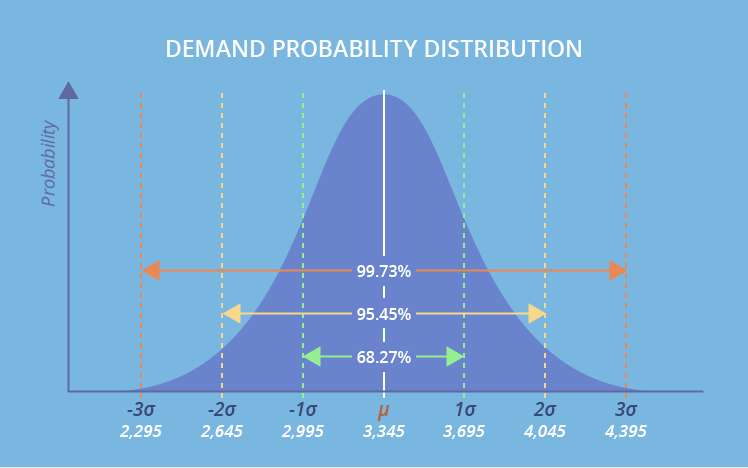 Now, when the theory part is over, let’s jump to the formula that will tell us the optimal inventory level for our milk:

It’s possible also to use demand forecast instead of mean demand. Then, we replace a voluntary buffer with probability distribution. Either way, we can’t say this approach is flawless. It would be good if probability distribution were always known and stable. In reality, we can only assume that demand distribution takes a certain form. That is why, despite serious math behind, predictions based on such assumptions can turn out to be rather good but still far from perfect.

This machine learning-based approach with a deep neural network (DNN) at its core is the most promising one, as it allows solving an inventory optimization task more effectively than other approaches do. According to this approach, we skip the demand forecasting stage and calculate inventory directly. This means that you won’t have to make wild guesses about demand probability distribution. Instead, a DNN will scrutinize your most detailed historical sales data and will consider multiple diverse factors that range from product promotions to store locations, weather conditions, etc. Then it will apply a loss function that will weight holding costs against shortage costs for the projected inventory figure to return the optimal one.

To understand why deep learning, which is the most advanced machine learning technique, shows splendid performance that leaves all the other methods far behind, let’s take a closer look at how a deep neural network works.

DNNs have a complex architecture with numerous layers that consist of neurons (or ‘nodes’). The neurons of one layer are connected with the neurons of the layer that follows. At each layer, certain coefficients (or ‘weights’) are applied to the values produced by the neurons of the previous layer. So, to have accurate predictions, it’s critical to have the weights tuned right.

The fairly simple example of a DNN illustrated above has 58 weights, which is not that much. A complex DNN may have hundreds of thousands of them. However, you don’t have to configure, say, all 200,000 weights manually – DNNs do this for you. They are considered the most advanced machine learning methods, and it's rightly so.

To get its intelligence, a DNN needs your historical sales figures split by SKU and by store to see inputs. Then, the network assigns random weights and comes up with an output, which is the inventory level for the SKU or the category. After that, the network applies a loss function that calculates the difference between this output with the one from the data set used for training.

Besides, loss function weights holding and shortage costs to balance the risks of out-of-stock and overstock. In our example with milk, holding costs will be high as the product is perishable. However, shortage costs may be higher as your customers are likely to feel frustrated if they don’t find this milk on your shelves. As long as the loss function remains large (in other words, the optimal balance between holding and shortage costs isn’t found), the network keeps reassigning the weights to minimize the error.

Do you think that your business task is unlikely to require 200,000 weights? Let’s look closer at this ‘terrifying’ figure and calculate the odds of ending up with this many connections.

An example to explain DNN essentials

Say, you are a retailer who uses deep learning (the 3rd approach we listed) to optimize inventory for each product category. To make the predictions as accurate as possible, you want the network to consider store types, seasonality and the influence of promotions and holidays. With this in mind, your input data can easily look like this:

Only for the input level, you need to have 280 neurons. But there are also several hidden layers (3 in our example) and an output layer. And all of them will need their own sets of neurons too.

When the neural network is trained and the weights are tuned, the DNN is ready to generate forecasts. To do that, the net ingests all the input values and applies weights to them. Then, these transformed values make their way to each neuron, where they are summed up and a certain activation function is applied to the sum. The output values of this little manipulation become the inputs for the next level, and the data flow continues through all the layers until it boils down to the output value – your optimal daily inventory level for your dairy category. 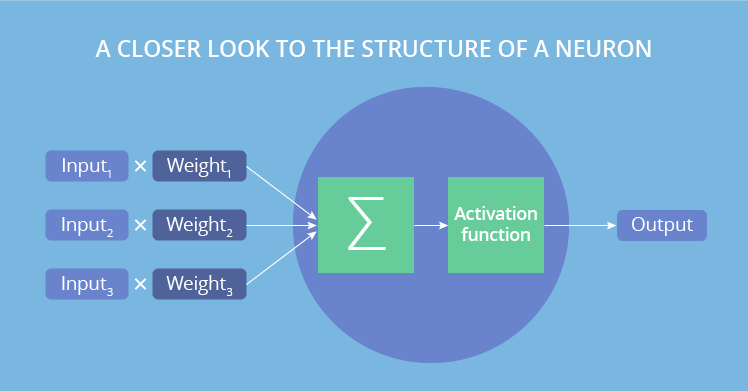 Advantages of deep learning you can enjoy:

DNNs are capable of consuming both numerical and categorical values. In other words, they can successfully ‘ingest’ sales values, as well as days of the week, product categories, store types, etc.

DNNs can capture the relationships where output doesn’t vary in proportion to input. Thus, this approach creates a more exact picture of the real world as the dependencies are rarely linear in a business environment.

Contrary to the first two methods we described, deep learning-based approach doesn’t rely on either safety buffers or risky assumptions on probability distribution. If all the DNN settings were chosen properly, you may be sure that a DNN returns a prediction, which is precise, objective and purely algorithm-driven.

Limitations of deep learning you should be aware of:

If you don’t instruct your DNN to analyze some factor, the network won’t know that this factor influences the outcome. For example, a fashion retailer who forgets to mention weather as one of the inputs to the DNN can risk ending up with an excessive stock of warm clothes. The reason is simple: a DNN won’t have the chance to see that weeks 45-48 showed a spike in demand for warm clothes last year because that November happened to be much colder than usual. Consequently, the DNN will perceive it as a seasonal spike and will include it in the forecast although this November is much warmer.

If you don’t have enough data, a DNN doesn’t have enough materials to learn from. The more factors you want to cover, the more inputs and weights you’ll have, and the more data you need. Look at how an extra factor – store location – influences the amount of required data. Quite a drastic change, right?

If your data is extremely noisy, a DNN won’t be able to convert multiple unusual or erroneous observations into precise predictions. After all, DNNs don’t do magic – they merely see existent patterns that influence current data and predict future data based on them.

DNNs are powerful but it doesn’t mean they are self-contained. For DNNs to perform faultlessly, you need professional data scientists to:

So, how to relieve inventory optimization headache most effectively

Out of three pills we described – simple math, statistics and machine or namely deep learning, we recommend you to take the last one – with deep learning flavor. Our data scientists consider this method the most effective for solving inventory optimization tasks. This approach ensures the most accurate and reliable predictions, thanks to analyzing diverse data, capturing complex non-linear dependencies and calculating inventory directly. Besides, it’s applicable to both raw materials and finished goods inventory.