iOS vs Android Development: Behind the Scenes

The Apple vs. Google axis emerged in the early 2010s, and tech analysts and consultants immediately referred to the situation as ‘mobile platform wars’, expecting a fascinating battle of the two major domains. Yet, not so much fascination was to come. As stated by Gartner in their February 2017 report, the use of Android and iOS platforms currently accounts for 81.7% and 17.9% respectively, leaving only 0.4% for Windows, Blackberry and other platforms. Tech experts got back to the fancy metaphor and declared the end of the ‘platform wars’. 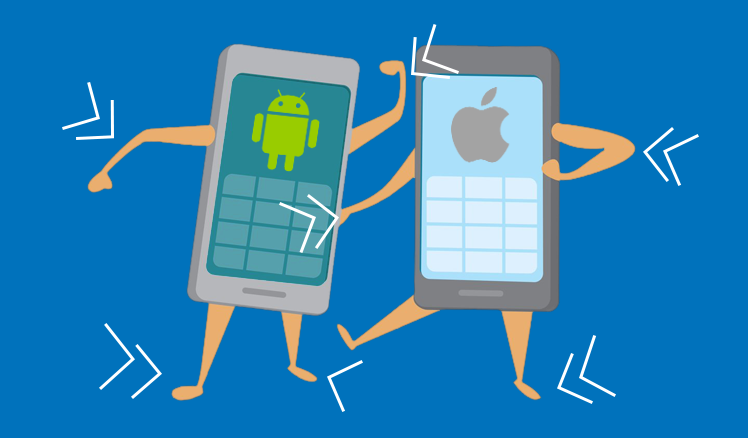 ..Is that it? No rollercoaster leaps or rope pulling? No flashy climax? Alas. Still, this doesn’t make the struggling platform any less competitive, and if we connect all the dots, it’s clear that there was more to the ‘war’ than simple declarations.

Since the iPhone’s debut on the market, Apple has been trying hard to make it impeccable on its own. However, long-term iPhone sales have been reportedly in decline, especially since Q3’16. Already disappointing in 2016, iPhone7 sales are predicted to be even lower in 2017.

Android, on the other hand, has been long represented on the market by multiple manufacturers. Yet after Google has delivered its own Android device, they weren’t able to get anywhere close to Apple’s sales. In fact, according to Morgan Stanley financial agency, Pixel is half as profitable for Google as iPhone7 is for Apple: while Pixel generates 22-25% gross profit margin, iPhone7’s does about 41%.

Android mobile development mainly focuses on monetizing via in-app advertisements, which is logical since Android users initiate 17% more app sessions per month than iOS users. Meanwhile, iOS developers prefer to gain financial profit from paid apps and in-app purchases that are 32% more likely to happen compared to Android. On the whole, Swrve statistics has shown that even though Apple owns a market segment that is about 5 times smaller, it still outperforms Android in terms of revenue per user.

The popularity of each platform is very different around the globe. While the West favors iOS devices, Asian countries except Japan give a visible preference to Android, and in Europe Apple and Google platforms are almost equally popular. This leaves no possibility to speak about the dominant global popularity of either.

Platform wars are over.. or are they?

Although they may be not easy to spot at first glance, the ‘battles’ of mobile platforms did actually happen and some aren’t even over yet. With all the differences between Apple and Google monetization policies, their devices and audiences, it’s hard to determine neither loser nor winner.  Perhaps, it’s not the right time to conclude just yet. Or maybe there’s no need to do it at all - the mobile development market feels good with two alternatives.