Mobile testing process: How to make it efficient

According to Compuware, 79% of users would only retry an app once or twice if it failed to work the first time. This raises project teams’ concerns about the app quality and calls for thorough mobile app testing. But how to make mobile testing efficient and predictable? To do so, mobile app testing vendors establish a quality mobile testing process that considers the specifics of mobile technology and the app under test. Let’s consider it in detail. 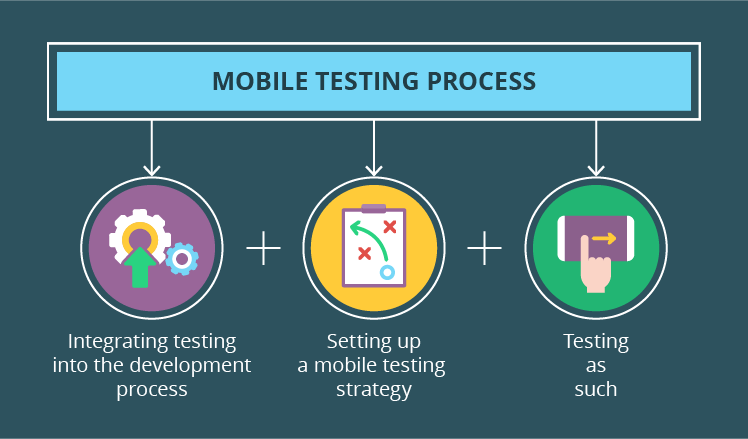 An efficient mobile testing process comprises several elements. The most important of them are:

Setting up a mobile testing strategy

To build a mobile testing strategy that is efficient and scalable, a testing team have to consider the following key issues:

Each test environment has its pros and cons:

Having devised a testing strategy, the team should look at the types of testing to perform.

Functional and non-functional testing efforts for mobile have their specifics dictated by the nature of mobile technologies (on-the-go availability anytime and anywhere, heavy reliance on network connections and more).

Functional mobile testing checks not only compliance with project requirements but also the following issues:

The basic requirement for the specifics above is to check that the app safely closes or goes to background without crashing or losing data.

Mobile application testing is not so black as painted. The key point here is to hold on to a structured testing process. To develop a stable mobile testing process to use after each iteration the team should focus on:

Keeping those in mind, the QA team will secure the testing process efficiency and, hence, the product’s quality.

Vast device coverage and complex functionality are key features of mobile apps. Mobile app testing services have to ensure them. That's what we do.